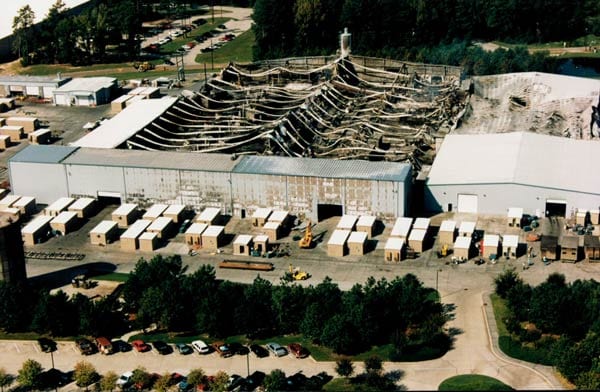 24 Jul The history of Fibrebond

Posted at 19:24h in Blog by Fibrebond WebAdmin
Share

Every company has an origin story. This genesis is what shapes a company’s values and can ultimately be what determines its success. Fibrebond is a company with such a story. Founded in 1982, the year Time Magazine named the computer Machine of the Year, Fibrebond was born amidst the digital technology revolution. It was a time when technology companies came zooming into the marketplace, determined to provide the next big thing, only to die out just as quickly. Fibrebond stayed the course, overcoming adversity and creating a strong culture. Today, they continue to lead their industry. Claud Walker, a successful businessman who intuited the emerging wireless telecommunication industry’s need for strong, aesthetic shelters, founded Fibrebond in 1982. The company saw a modest beginning, planting roots in Bossier City, Louisiana. Their earliest products were fiberglass buildings used in microwave communications.

This innovation lead to Fibrebond’s first partnerships with Southwestern Bell Mobile Systems and Quest Microwave. In fact, Quest gave Fibrebond its very first order. By 1984, the company expanded to a 180-acre facility in Minden, Louisiana, and by 1994 built an Installation Center to receive, warehouse and install customer equipment into Fibrebond shelters. The road to success for Fibrebond has not been without its challenges, however. In 1998, a massive fire destroyed Fibrebond’s main manufacturing facility. It took four hours to contain and another twelve hours to extinguish. In the wake of this calamity, Fibrebond quickly shifted production outdoors and off-site without missing a single employee paycheck or customer order. What looked like catastrophe at the time ultimately became an incredible opportunity. Within 11 months, Fibrebond opened a new plant with advanced European concrete casting equipment. This sophisticated casting system ushered Fibrebond into a new era of product diversification utilizing precast concrete buildings.

The new plant and automated casting system lead Fibrebond to several milestones that contribute to their continued success today. Their first international order, for example, was for a corrections project in which Fibrebond supplied 20 corrections modules for a facility in Guam. The company was also ready and able to respond to the desperate needs of the community in the wake of Hurricane Katrina. Fibrebond sent classroom modules to Jefferson Parish School System, providing a fast, permanent solution for more than 400 displaced students. Another 96 buildings in several other parishes were quickly provided as well. Following these remarkable achievements, Fibrebond hit another milestone with the creation of Fibrebond Power in 2014 and the acquisition of International Supply Company (ISCO) in Edelstein, Illinois in 2015.  The history of this company is a story of growth. At the heart of its success is the Walker family.

Claud is the patriarch and original visionary of Fibrebond; Todd followed in these footsteps, orchestrating their partnership with K-12 education and now Fibrebond’s expansion into Field Services, and Graham solidified Fibrebond’s solar and power markets. What started with telecommunication shelters has become a large-scale power company offering versatile products such as concrete equipment shelters, steel skids and platforms, equipment enclosures and more. Every company has a unique story. The history of Fibrebond is a rich one spanning family generations and more than thirty years of business. Its timeline has been punctuated with challenges, all of which only served to strengthen and diversify the company. Fibrebond is, in every way, an American company with a “Never Say Die” attitude and a dedication to excellence and service.